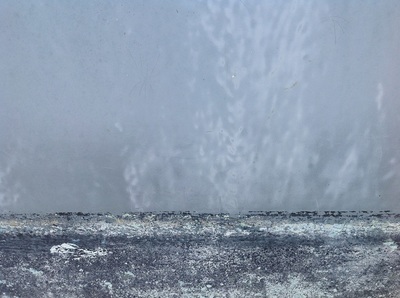 Seascapes initially recorded during a painting holiday to Yarmouth in the Isle of Wight during June 2015 with the Richmond Painting group.
The island is very flat, and the seastate was moderate to good. However, inspired by the paintings of Turner, these seascapes were created to capture atmospheric states, squalls, and the energy of the salty water.
Having an intimate relationship with the sea following 5 years as a BSAC scuba instructor, several in this series also describe the transitional depths underneath the surface of the water...to what lies beneath.
The picture plain flexes between textured flaking paint on board to expansive seascape, horizon and sky.
Images are enhanced in Photoshop with filters, paint,  and collaged areas.

2018: This project is being used as the root for new work in different mediums.
Powered by